The autopilot: automation during combat

TAT3D > News and Events > TAT3D > The autopilot: automation during combat 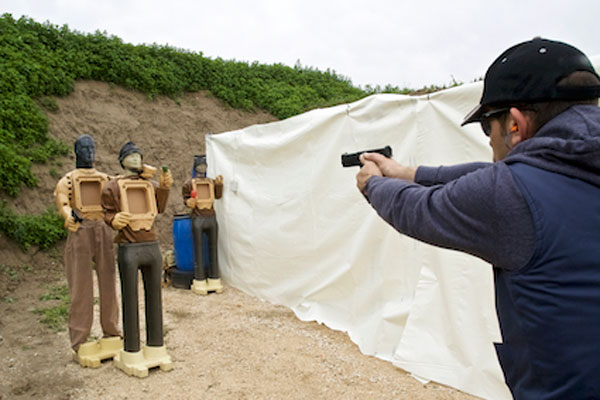 “Warriors don’t shoot concentric target circles. Warriors do not shoot at sketched outlines. Warriors must fire at lethal and therefore legitimate targets. Thanks to the clearly superior, dynamic, realistic method of photo-realistic targets, our warriors develop the conditioned reflexes that allow you to automate the appropriate reaction. “

WE GO BEYOND, WE PRESENT THREE-DIMENSIONAL TARGETS.

Continuous training serves to make certain behaviors that we will then implement in a dangerous situation natural and extinctive “by fixing them in memory”. Under stress, the human brain would reduce the possible actions to a minimum for a question of economy and survival, the training serves to ensure that those we will need to survive are among these.

It is not uncommon to hear stories (from trusted people) that being prepared for the fight by years of training, in the event of a real violent confrontation they do not remember how they knocked out their opponent, in situations of very strong stress then, where in game is life, it happened that they did not even remember if it was they who knocked him out! A bit like us good guys who maybe in the morning we do not remember if we have closed the front door, we go back to check and it is always closed, because we have always closed it, it has simply become a routine that makes us forget it as soon as it is done, that’s all.

Now let’s go back to the case that interests us most, namely military training or law enforcement. In this case if the operators trained with anonymous shapes or with a generic human profile stop, they would condition their “autopilot” to shoot anyone they suddenly find themselves in front of, as well as the fact that this subject should be facing them and not from the side or in other positions (remember that sitting on the sofa with a cigar in one hand and a whiskey in the other we are all heroes, but in combat under stress things definitely change between tunnel vision, attenuated hearing, elevated heart rate, wheezing, etc.) and that they may even hesitate before the armed and ill-intentioned target , just because they never faced it in selective training or, that is, having to select him as guilty with respect to another who perhaps holds a mobile phone or other object of common use in his hand.

The three-dimensional target, on the other hand, solves all these technicalities by increasing the realism of the training also thanks to the accessories that can be equipped with it in order to work on target selection. In practice we would have to do with something like “weapon! Shoot!”, “Cell phone! Do not shoot!”, “Weapon! Shoot!”, “Wallet! Do not shoot!”, Etc ..

As proof of what has just been described, we cite a case that really happened relating to a “wrong” training method that could cause real “training scars” that are difficult to remove once they have become an integral part of our modus operandi:

“… American policemen have been training for almost a century in the use of revolvers. Since they did not want to collect all the shells fired at the end of training, the officers generally had the habit of firing the six rounds contained in the drum, stopping, picking up the six shells, putting them in their pockets, reloading the revolver and starting again. shoot. Everyone assumed they would never do it in a real fight. … Well, that’s exactly what happened. At the end of numerous shootings, the agents discovered with some dismay that they had shells in their pockets without reminding themselves in the least that they had put them there. In many circumstances, unfortunately, we saw officers who had fallen in combat holding a handful of shells in their hands: they had died trying to carry out an “administrative” procedure that they had internalized in training. “

Another even more striking case

“A policeman had practiced techniques for a long time to disarm an opponent. At every opportunity, he would ask his wife, a friend, or his patrol companion to point a weapon at him so he could practice snatching it from him. Here is the sequence he practiced each time: he snatched the weapon from the attacker’s hand, held it in turn, and then returned it to him to repeat the exercise. One day he and his colleague answered a call about a dangerous subject in a small suburban supermarket. The agent was patrolling a lane as his partner walked along the parallel one. Arriving at the bottom of the shelf, he was taken by surprise when the suspect came around the corner and pointed a revolver at him. In the blink of an eye, the agent disarmed the suspect, stunned him by the speed and refinement of his disarming technique. But no doubt the criminal was even more baffled when the agent, a moment later, returned the weapon to him, just as he had practiced hundreds of times up to that day. Fortunately for the agent, his colleague leaned out of the other lane and shot the criminal. “

In almost all tactical pistol shooting training we see the operator who draws the weapon, fires, performs a visual scan of the environment, and only at this point puts the weapon back in its holster. Ideally he should instead practice firing until the lethal threat is over.

With TAT3D collapsible targets it is possible to train with targets that fall after receiving a certain number of hits, adding an additional level of realism to the training and contributing to the memorization in the deepest part of the brain of the operation to be put in place in case of real conflict.

Many of our soldiers are currently engaged in numerous international operations in contexts where must comply with strict rules of engagement similar to those of the police force. Thus, if on the one hand an appropriate training with realistic simulators can increase the capacity of conditional engagement by saving the lives of many of them, on the other hand it is essential that this training is calibrated in absolute compliance with the same rules of engagement, and this is only possible with the tools suitable for the purpose.