The Close Quarte Combat (CQC) it is a tactical concept that involves the physical confrontation between different fighters often hand to hand. It can happen between military, police and criminal units, and other similar scenarios. In the typical close combat scenario, the attackers attempt an immediate and violent takeover of a structure controlled by the defenders, who usually don’t have an easy way to retreat. Since enemies, hostages, and other operators can be closely intertwined, close combat requires a swift assault and precise application of lethal force. Operators need great expertise with their weapons and must make decisions quickly and effectively in order to minimize accidental losses.

There Action violence in this case it is essential to acquire and maintain physical and psychological momentum: the assault team can break through doors, pierce walls, enter through windows, abseil or jump from helicopters. Masts and platforms mounted on purpose built vehicles can be used to create unexpected entry points. The tear gas assault, flashbangs and gunshots are complemented by the intimidating and aggressive actions of the raid team. Since hostiles often lurk among hostages, once the action is over, operators must maintain dominion over anyone who is still alive. 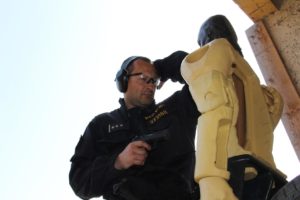 Non-war CQB military operations may involve peacekeeping or riot control, as well as close hand-to-hand combat techniques with individuals arrested or intending to assault the operator or a civilian.

THE realistic TAT3D targets both of the series Mario is Tobj they are suitable for recreating all the scenarios described and those typical of assault actions, moreover they also allow the study of melee with all types of weapons both white and firearm, allowing the training of distance gain techniques, extraction of the weapon of defense and attack of the aggressor.

Awareness is a good thing, but if not accompanied by specific skills it only creates anxiety.